skip to main | skip to sidebar

IPOH, Jan 18: Amid intensifying speculation that snap elections will soon be called in Perak, deposed Pakatan Rakyat Mentri Besar Nizar Jamaluddin said that although the Federal Court had still not informed him when judgment will be delivered on his suit against Umno leader Zambry Kadir, he was prepared for any eventuality.

“No news, nothing yet although rumours have certainly been rife these few weeks,” Nizar told Harakahdaily in an interview. “But neither I nor my lawyers have received any notification yet.”

Zambry, who was installed as the Umno-BN chief minister, had recently gone to Saudi Arabia to meet with Prime Minister Najib Razak, who was there on an official visit.

Their overseas encounter raised eyebrows, sparking talk that Zambry - unable to garner support for his administration despite having illegally overthrown Nizar a year ago - was now seeking to dissolve the legislative assembly. This would pave the way for a state-wide election, which has been much clamoured for by Perakians.

In one of the most controversial cases in Malaysian legal history, Nizar had sued Zambry for illegally usurping his position as the chief minister of Perak in February 2009.

The High Court had on 11 May ruled in his favour, with Justice Abdul Aziz Rahim declaring him the rightful Mentri Besar of Perak as he had not resigned and could only be removed by a vote of no-confidence taken by the legislative assembly. In other words, the Sultan of Perak did not have the constitutional authority to sack the chief minister.

However, on May 22 and at lightning-quick speed, a three-man bench at the Court of Appeal overturned the High Court decision on the grounds that Nizar had ceased to command the majority of the legislative assembly.

Nizar then appealed to the Federal Court, which heard the case on November 5. Only a five-man bench was convened at the apex court although Nizar had requested for the maximum 11-man panel because of the gravity of the suit - which is to determine who is to govern Perak.

After a one-day hearing, the Federal Court reserved judgment and till now, Malaysians – especially Perakians – are awaiting the outcome. Given the judiciary’s record of bowing to political pressure from top Umno leaders, most Malaysians fear the final decision may favour Zambry.

We will never turn our backs on Perakians

Nevertheless, Nizar is unfazed. To him, it does not matter if the final decision goes against him or if Zambry tries to slip a fast one past him by dissolving the assembly to regain the political advantage with voters.

For Nizar, no matter which, it is all in a day's work. Even if he is re-installed the Mentri Besar, both he and Pakatan have promised fresh election to allow Perakians to choose the government they wished.

“I think all of us Malaysians and Perakians know what is blowing in the wind. We know the level of corruption and consequently how great is the need for reform. But we cannot give up,” the 52-year engineer by training said.

“For us in Pakatan, we will continue to run a parallel government to monitor and keep track of the usurper Umno-BN. We will do our best to make sure that the rights and interests of the Perak people are protected. We won’t hesitate to publicize any wrongdoing that we come across and unravel.

“In Perak Pakatan, we are very close-knit and united. We go out and meet the people, engage them, and try to service and help them, as a group. We plan many activities together. And the results have been tremendous. We are very well received everywhere we go and the people always encourage us and tell us not to give up. That alone keeps us going.”

Nizar also slammed PM Najib over the latest public uproar – this time, the spate of attacks against non-Malay places of worship.

It was Najib who had orchestrated the Umno coup d’etat of the Pakatan state government in Perak. The PM is now in the spotlight once again.

He has been widely blamed for the recent outbreak of religious bigotry – one of the worst in the nation’s history – by fanning religious fanatics with his communal rhetoric aimed at garnering political support from the Malays for his Umno party.

“It is one of the most ridiculous and unscrupulous acts. It has gone out of control and Umno is now trying to cover up. But instead of coming out with a good and sincere solution, the Umno government says East Malaysia can use Allah but West Malaysia cannot. Is it trying to divide the country now?” said Nizar.

Minister in the PM’s Department Nazri Aziz had said in a recent press interview that the government would allow the word Allah to be used by Christians in Sabah and Sarawak but not in the peninsula.

The contradictory and confusing stance has been widely denounced by civil society as well as by Church leaders. 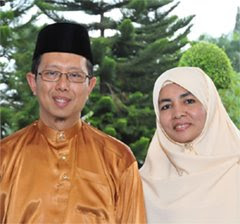